Wayland is a display server protocol developed for Linux by Kristian Høgsberg, an experienced X11 developer then working for Redhat.

A display server is the server side part responsible for presenting the Graphical User Interface (GUI) on a computer. Wayland will  replace the X11/ X-windows based graphic architecture that has been used since 1987.

The graphics that is presented by Wayland is rendered by the client and dispatched to the server (Wayland). An application that display windows is an example of a client.

In addition to be a protocol for a display server wayland is also:

An event handler/dispatcher; Wayland will recieve mouse and keyboard events from the kernel and will be responsible to transform and dispatch the relevant events to clients. Wayland will for example transform global mouse coordinates (position on screen) to the local coordinations, coordinations based on the size of the client's window. Relevant events is for example keystrokes for a window in focus; this will result in a more secure architecture and make it harder for other applications to eardropp on events - a potential security risk.

Most display servers will use libinput for handling input devices.

Wayland is not an renderer of graphics like X11 was. The rendering of graphics like windows,menus and text is outside of  Wayland's responsibility. The client has the ultimate responsibility for render its own GUI. In nearly all cases the client will delegate the rendering of GUI to one of the standard toolkits in linux - GTK, QT, ELF. All these toolkits will support Wayland architecture. 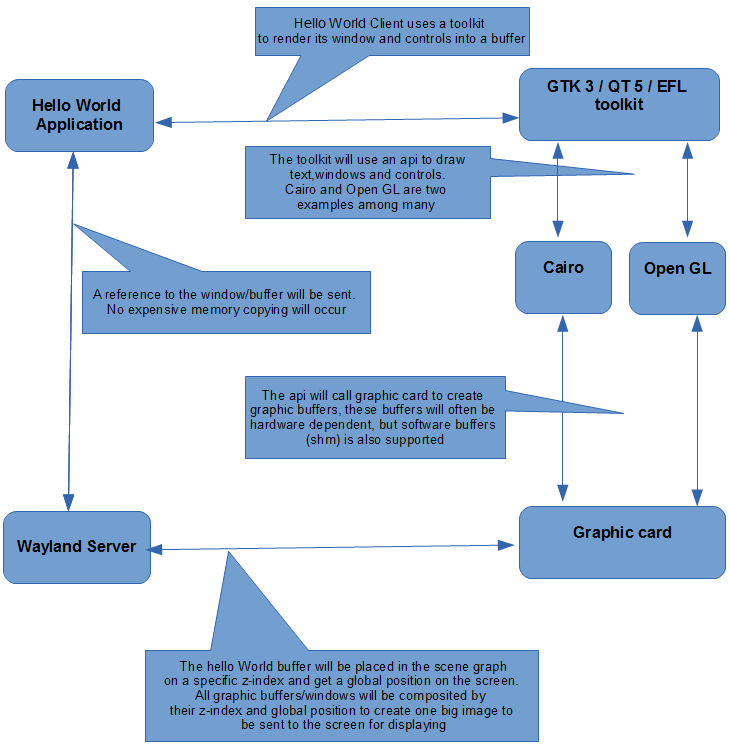 All the big Linux desktop environment are expected to build their own implementation of Wayland.

Weston is the reference implementation of the Wayland Protocol. Smaller desktop environments like XFCE and similar may use it.

Kwin is the KDE's Compositor and Window Manager. Wayland integration is underway and the main developer, Martin Gräßlin, is publicly commited to Wayland.

There exist an rdp (Microsoft Remote Desktop Protocol) implementation in Weston and the idea is to let the display server send compressed images, similar to how VNC works but with a more efficent implementation; the perfomance is expected to better, or at least similar to that of X11.

0 0 169 views
The article has no translations